History of the Head Start Program

Project Head Start, launched as an eight-week summer program of the Office of Economic Opportunity in 1965, was designed to help break the cycle of poverty by providing preschool children of low-income families with a comprehensive program to meet their emotional, social, health, nutritional, and psychological needs.

Recruiting children age three to school entry age, Head Start was enthusiastically received by educators, child development specialists, community leaders, and parents across the Nation. Head Start now serves approximately 721,000 children and their families each year in urban and rural areas in all 50 States, the District of Columbia and the U.S. Territories – including many America Indian and migrant children.

In 1969, Head Start was transferred from the Office of Economic Opportunity to the Office of Child Development in the U.S. Department of Health, Education, and Welfare, and has now become a program within the Administration of Children, Youth and Families at the Department of Health and Human Services. A well-established, though still an innovative program, Head Start has had a strong impact on communities and early childhood programs across the country. Since 1965, Head Start has served over 13.1 million children and their families.

Follow the timeline to see the history of Head Start. 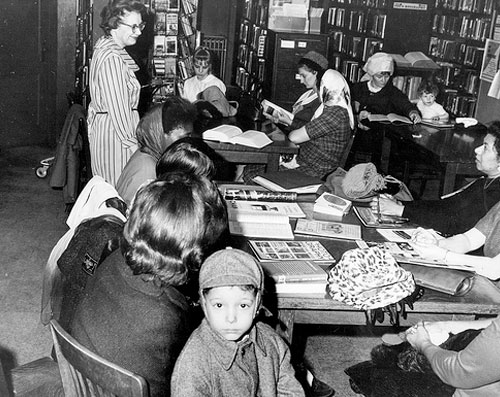 (The Head Start Program at the Corona Branch of the Queens Borough Public Library. March 4, 1965)

The arrangement of the blocks represent stairs by which this can be accomplished.

The vertical strips represent the child and parent.

The arrow pointing upward represents the direction out of poverty and on to the future.

The colors, red, white and blue represent the United States and the many opportunities it provides for its citizens.

The program is locally administered by approximately 1,400 community-based non-profit organizations and school systems. Grants are awarded by the Department of Health and Human Services Regional Offices, except for the American Indian and Migrant programs, which are administered in Washington, D.C. The Head Start legislation states that the Federal grant to operate a local Head Start program shall not exceed 80 percent of the approved costs of the program. Twenty percent must be contributed by the community. The non- Federal share (the 20 percent) may be in cash or contributed services.

Head Start experience has show the need of the children vary considerably from community to community and that, to serve the need most effectively, programs should be individualized. In addition, experience to data suggests that, when Head Start programs are designed in ways that take into account community resources an the capabilities of the local staff, a program can often be mounted that will improve service for children within present funding levels. Therefore, Head Start permits local Head Start sponsors to provide children with classroom-based or home- based developmental programs.

The 1994 reauthorization of the Head Start Act established a new Early Head Start program for low-income families with infants and toddlers.

In Fiscal Year 1997, $159,000,000 was used to support 173 projects to provide, Early Head Start child development and family support services in all 50 states and in the District of Columbia and Puerto Rico. These projects, plus a number of Parent and Child Centers and Comprehensive Child Development Program’s serve 22,000 children under age three. In Fiscal Year 1998, funding of $279,250,000 will be used to support Early Head Start programs.